The Me My Elos Hair Removal System

It's fair to say that I've tried a lot of hair removal methods in my time as a beauty journalist, even more in my time as a teenager. And as far as hair removal goes, I'm the worst sort of candidate: a very dark brunette, who hates any body hair. Unfortunately, I'm not one of those lucky people who can just leave their leg hair to its own near-bald devices (I hate you people), nor am I the type of laidback girl who is prepared to let her boyfriend see her legs as anything other than perfectly smooth. If I'm in between waxes, I exist in trousers/tights/thigh-high socks...sometimes all three.  Since secondary school I have tried shaving (grows back too quickly and stubbly), depilatory creams (never seem to get the hair completely), bleaching (stinky), exfoliating hair removal pads (completely useless), waxing (painful), epilating (even more painful), heat-based hand-held devices (if you've ever put your hair in a bunsen burner, this is what it smells like) and I've even tested laser (not as successful as people make out).

I've had some really terrible hair removal experiences too. My first time shaving I ran my finger horizontally across the blade. I don't know what I was expecting but what I got was one seriously bloody finger. One bikini wax left me so bruised I couldn't wear a bikini, which ironically was the reason I went to get a bikini wax in the first place. Another time I decided to apply a wax strip to my upper lip. After removing it, I must have had some sort of bad reaction to the wax as I immediately broke out in a 'spot-moustache'. Epic fail. And I'm not alone. A dear friend of mine bought an epilator with a facial attachment. She decided to try it in between her eyebrows when the device effectively ate her face and left her with a bloody gouge. She told people she walked into a door. Obviously. Because, let's face it, hair removal is still an embrassing topic to discuss with your friends, let alone your boyfriend/husband (or blog). And if I'm totally honest, my somewhat prudish personality (even my mum says I was born in the wrong era. Yeah like the 1800s), still dies a little every time I have to undress from the waist-down, legs akimbo, for a bikini wax. What I want is to remove hair in the comfort of my own home, with little fuss or cost but with seriously long-lasting, even permanent results.

Cue the new Me My Elos Hair Removal System, £449.99, which launches at Boots this May. Okay so it's not exactly cheap but when you consider how much you'd pay for in-salon laser hair removal, or even totted up how much you spend on a monthly leg and bikini wax, actually it doesn't work out that badly. Unlike other IPL (Intense Pulsed Light) devices on the market, the Me My Elos uses a combination of IPL and Radio Frequency energy to penetrate deeper into the skin to better damage the hair follicle. The device is smaller than a lot of other at-home IPL and laser systems and here's the real USP, it's a lot quicker. Rather than having to aim and shoot a small section at a time, like other devices such as the Philips Lumea or the Tria Laser System, the Me My Elos glides over the skin, emitting a pulse every second or so. In fact you can cover the whole body (legs, bikini, arms and underarms) in just 30 minutes. The device runs on a replaceable cartridge, £39.99, which lasts for 5400 pulses or 3 full body treatments but the longer you persevere with the system, the less often you'll have to use it so you won't need to replace the cartridge as often. There's also the option to buy a facial kit for safe hair removal, an epilator, £39.99 (Boots.com), and shaver attachment, £39.99 (homedics.co.uk) which easily click in to place.

Another selling point is the fact it can be used on a wider range of hair and skin colours. The device is safe for very fair white, fair white, cream white, brown (Mediterranean Caucasian skin) and dark brown (Middle Eastern) skin types. It cannot be used on black skin. If you have blonde, red or grey hair, this is where the epilator attachment comes in. By first pulling out the hair at the root, you create a microscopic wound that the IPL and RF energy can target to destroy the follicle. Very clever. But don't think you can wax or epilate the week, or even the night, before. The 'injury' must be fresh, hence the simultaneous combination of the epilator and IPL device. For those who are darker or can't bear the thought of epilating, the area should be shaved beforehand.

DID YOU KNOW? The Me My Elos has been found to reduce body hair by up to 89% after the first four treatments. 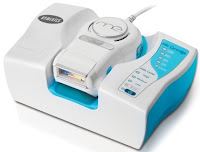 I used the device for the first time yesterday and can attest to its ease of use - I did my legs and underarms in about 20 minutes whilst simultaneously watching 'The Family'. I had it on the highest setting and can honestly say it did not hurt a jot (and I'm a wuss), but feels satisfyingly warm on the skin. However, the flash is very, very bright so I did have to avert my gaze for the first 5 minutes. The brightness is apparently safe for use but sunglasses would be a good idea. I did try the device with the epilator attachment on my arms but it only removed about half of the hairs. I would have needed to go over the same area at least twice to successfully remove them all, which you shouldn't really do with IPL device as it can irritate the skin. Obviously I can't say anything about the results yet. After the 4th treatment I will let you know but for the first time in a long time, I feel like permanent hair removal might just be a possiblity. And in the spirit of making everyone feel a little less alone when it comes to hair removal, why not share your own hair removal horror stories below. Sx
Posted by S at 13:51