Are you a Belieber? Try Justin Bieber 'SOMEDAY' 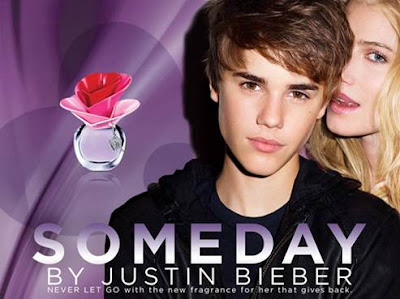 I am not afraid to admit that I am a Justin Bieber fan - perhaps somewhat ironically though - I have an 'I heart JB' keyring - but I can still be found singing 'and I was like, babaaaaay, babaaaaay, babaaaaay, ohhhhhhh' in the bathroom and like to check-in every week or so and see how the Bieber and Selena (or Selieber) are getting on in their latest holiday snaps (thank you Daily Mail website). But would I wear his debut fragrance for women, 'SOMEDAY'? Erm well maybe...someday.

If someone asked me 'what are you wearing' there is absolutely no way I would tell them 'Justin Bieber - SOMEDAY'. But then again, I am a 25 year old woman with a semi-serious job (beauty product testing IS important I tell you!). Roll back 10 years and I would've lapped that scent up like my sister's dog around Aldi's Specially Selected Onion and Chive Butter Twists. Funnily enough, I got my mum to smell the fragrance yesterday - she is 54 and very knowledgable on her perfumes - and she loved it. She admitted she would definitely wear it but if asked what she was wearing she would conveniently forget. Hmmm.

So what has the Bieber got to say on his debut fragrance? “SOMEDAY is the idea that we can change the world, make our dreams come true, and even be with the one person that means everything,” he says. “Giving back has always been incredibly important to me, but let’s be honest... I wanted to create a fragrance for my female fans that I can’t get enough of... that I want to get next to and I can’t stay away from.” Clever, Bieber, very clever.

The reason I would maybe, someday, wear this fragrance - and it's not to get close to you Master Bieber - is because actually this fruity-floral smells quite nice. After my first spritz, though, it was a different story. Top notes of mandarin, pear and wild berries made me think this was going to veer into sickly-sweet territory - a personal fragrance turn off - but after 30 seconds or so this mellows into a deep floral heart of jasmine, water lily and coconut orchid. The base includes sandalwood, vanilla and soft musk and I must admit as an EDP, it lasts on the skin well. It doesn't smell young either, in case you were wondering. You only have to witness my mum's 'I'd wear that' reaction to realise that. Did my boyfriend like it? Well he was indifferent. But I'm impressed. This is a very admirable first fragrance attempt - although I'm not sure how involved JB was in the process - and so far it has won over 2 out of 2 Maylor girls...and we're a tough crowd. 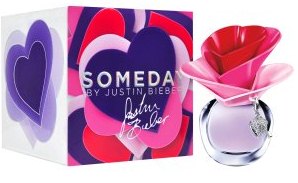 Before we leave this scent review, we must touch upon 'that' bottle. Does it remind you of something? It should do. It's pretty darn similar to Marc Jacobs Lola. Tactile rubber lid? Check. Pink-hued top? Check. According to reports, MJ (erm Marc Jacobs, not 'heeeeee-heeeee-owwwww' Jackson) is totally aware of JB's perfume bottle but has chosen not to take the matter further. I'm also surprised that Harrods are currently selling the fragrance exclusively - it will launch nationwide on 10th September. Are teeny-boppers even allowed into Harrods?

If you like the sound of this scent/want the possiblity of getting close to Bieber prices start at a very reasonable £23 for 30ml. Sx
Posted by S at 10:28