Emily Blunt is the new face of YSL Opium 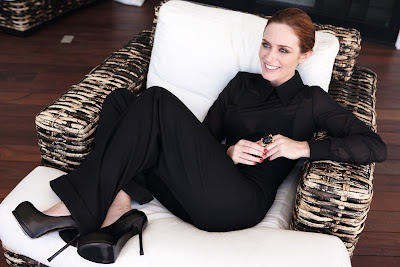 I don't think I've met anyone who doesn't have a nice word to say about Emily Blunt. Not that any of them have met her but she seems to exude a 'let's be BFFs' friendliness that isn't compromised by the fact she's pretty darn beautiful. It is the latter that I'm sure has secured her one of the most coveted roles in beauty - the face and ambassadress for YSL Opium - but the former which makes me think it's quite a surprising union. Let's not forget just how provocative and racy that 90s Opium print campaign was, featuring a naked and then-curvaceous Sophie Dahl. I just can't imagine that same spark from Blunt but I'm ready to be surprised.
Speaking of her latest role, Emily commented, 'I am very honoured to have been chosen to be the face of OPIUM by Yves Saint Laurent. I have huge admiration for the House of Yves Saint Laurent and feel that this House has always truly understood the expression of elegance - its mystique and its indescribable power. It is a really exciting experience to embody this legendary fragrance, which has stood the test of time without its allure ever being diminished. Being a part of this new campaign and being able to tell the story of this very evocative fragrance is a real thrill.'

The campaign, which has been photographed by legend, Patrick Demarchelier, launches soon. What do you think Best Tressers, will she make a good Opium girl? Sx