Yesterday might have been the greatest day of my life. No, I didn't win the lottery. No, my boyfriend didn't propose. Ladies, I met Leighton Meester and Vera Wang. Let me set the scene for you. As a major (and I mean MAJOR) Gossip Girl fan, I was overjoyed when an invite arrived about a month ago from the lovely Coty Press Office requesting my attendance at the latest Vera Wang fragrance with new face, Leighton Meester (ARGGGHHHH). So finally the day arrived and we gathered in a lobby at the recently opened Corinthia Hotel - so new is the hotel, that the smell of wet paint lingered in the air - where we were treated to champagne and a glimpse at the actual Vera Wang creation Leighton wore in the fragrance advertisement.

﻿ ﻿
﻿  ﻿﻿ ﻿﻿
At around 3pm, we were taken through to the Victorian Ballroom and seated at peony-covered tables. The afternoon tea was gorgeous - think crustless, perfectly-rectangular sandwiches and too-pretty-to-eat cakes. Leighton and Vera then arrived in the room. Vera is as chic as you'd imagine (seriously, how does she keep her hair so shiny?) and her passion for the fragrance is palpable. The fragrance has been a year and a half in the making and it seems it's been a rather autobiographical process for the designer. 'A lot of my fragrances have been based on what goes on in my life,' she admitted. The two women seemed to get along really well and definitely had a mutual respect and appreciation for one another's work. Vera said herself, 'I got lucky with Leighton' and revealed that the commercial was shot in freezing 10 degree temperatures without a whinge or diva-ish moan from Leighton (I'm pressuming she means Fahrenheit because if that's celsius, Leighton needs to spend some more time in the UK...10 degrees celsius is positively balmy!). As for Leighton, well apparently the perfume is a lot like herself, 'fun and flirty, quirky and feminine at the same time' she said. 'At first I was telling family and friends, "It's my fragrance" but now everyone in my family has it.' 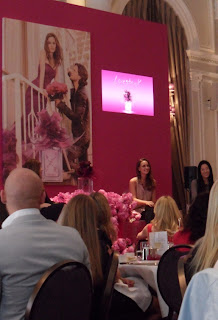 After the official talk on stage, Vera and Leighton walked around the room stopping at each table to chat for a little while. It's a testament to Coty, and of course, Vera Wang fragrances, that this was handled so flawlessly. Finally the two women arrived at our table and I have to say Vera is delightful. At the time, I felt more relaxed talking to Vera briefly than I did standing next to Leighton but now I'm feeling totally starstruck (or should that be Lovestruck) by the designer. This is the woman who revolutionised the wedding dress design industry - I'm not embrassed to confess that I spend an awful lot of time perusing her gowns online. She shook hands with us all and told us she'd been shopping for Britain, literally - she's doing all she can to boost our economy obviously! Leighton is slim, but naturally so, and her hair was pulled over to one side in loose curls. Makeup-wise she chose a chocolate colour on the eyes, a hint of rosy blush and a pink gloss on the lip. As for her attire, she was wearing black leather trousers and a loose-fitting chiffon tank top. Highlight of the day was when she said she loved my nameplate necklace! 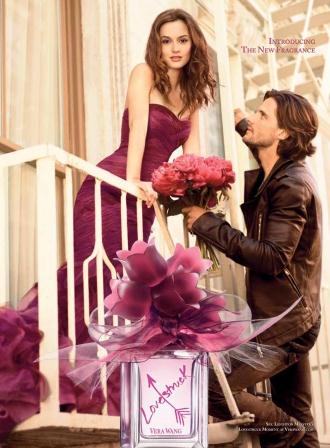 As for the fragrance, well, as you might expect from Vera Wang, the bottle in itself is a piece of art. I'm happy to go on record saying that it is, without a doubt, the most beautiful perfume bottle I've ever seen. The cap - all knots of burgundy ribbon - is incredible and apparently caused the designers at Coty a few sleepless nights. The fragrance eases you in with delicately fruity top note of pink guava, before luring you deeper with a tuberose heart and finally a deep, woody base. It's feminine, without being sickly-sweet, and although it's unlike any perfume I've ever worn, it has a classic element to it that will make you think you've had it forever. This is more grown-up than Princess (Vera calls it 'Princess's older sister') but to me it seems to transcend age. But I guess that's what Vera was going for - because everyone has felt that first heart-thumping flush of love, haven't they? So why shouldn't everyone be able to wear Lovestruck? 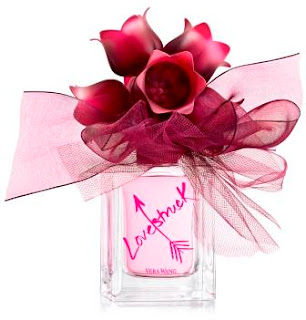