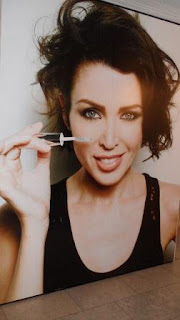 Yesterday I went to the launch of ModelCo's latest innovation, Fibre Lash Mascara at the Hospital Club, Covent Garden. Founder, Shelley Barratt, used to be a model agent (hence the name and inspiration behind the brand) and was on hand to discuss the company's success. Started in Sydney in 2002, it seems only right the new face of Fibre Lash should be everyone's favourite Aussie (after Alf Stewart of course), Dannii Minogue. I was sat a few seats down from Dannii and my, she's petite in real life. Her beachy blonde colour had grown out into a mid-brown hue, which made her piercing blue eyes pop...like really! Sadly, Dannii only had time to speak and have her photograph taken with one journalist. Harumph. It would've been nice to get the lowdown on her beauty must-haves.

She did, however, rave about the mascara set on stage. She first discovered the product when she went for a massage and the therapist's lashes were so long she couldn't concentrate on what she was saying. It turned out she was wearing Fibre Lash Mascara. "On the last series of X Factor, everyone was saying to me, 'you look so young', and it was because I'd stopped using false lashes and applying Fibre Lash instead," she said. Minogue makeup artist, Christian Vermaak, has been using the mascara on sister, Kylie, too. 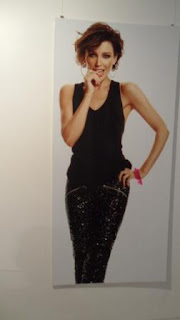 Dannii went on to talk about her love of makeup, admitting, "I am a confessed beauty junkie, but I only have 5 minutes to do my makeup while juggling a baby and rushing around." So hooked is she on the new mascara that she's even been wearing two coats to nip to the shops, but realised the 'fabulash' result (a word she's coined herself) was a bit much for day.

As for the mascara itself, it involves a three step process - first, the black mascara coats the lashes, before the mini lash fibres are applied, just as you would use mascara. The fibres come out white so the final step is reapplying the mascara, in a zig-zag, wiggle fashion.

Now at £35, it's steep - there's no arguing that - and according to the press release, you'll get 40 uses out of one pack. If, as the product claims, it replaces the need to wear false lashes, then I suppose you could argue that actually the cost per wear doesn't work out too badly...that is if you wear falsies everyday. For my part, I'm really impressed by the product itself. For those that can't get to grip with falsies or really like that Cheryl Cole length on a daily basis, then this could be worth the investment. As you can see from the below pictures, my lashes are visibly longer and, as a welcome bonus, nicely curled. It's very easy to use and just wearing it today, I've had people comment on my lashes. My one criticism is the lashes do have a slight spidery look them, like those spiders that have furry legs, so my advice would be don't go overboard with the fibres. I would definnitely say that this is the best mascara product I've tried in terms of mimicking the effect of false lashes. It gets pretty darn close.

The mascara will be available in Boots from June but from today you can sign up to the waiting list on Boots.com. Sx
﻿
﻿﻿