...no it really was Maybelline at last night's festive soiree at Soho House. I haven't seen an event so squished in a long time, which is a real testament to the brand and its pro PRs. New launches decorated the room - FYI, the new 24HR Super Stay LipColors are to-die-for.
Henry Holland was DJ-ing and played some choooooons (Whitney Houston 'Queen of the Night' has to be one of my favourite songs of all time, thanks Henry). Our 'Secret Santa' was a very suave-looking George Lamb. We had a sneaky chat with him and during our brief encounter I learned two things. He swears like a sailor (he dropped the F-bomb 3 times, gasp!) and his hair colouring is totally natural.


This was a great week for canape watch. From mini hamburgers and fish & chips, to chicken goujons and tuna nicoise, it really was the kind of food you want and need at a cocktail-fuelled bash. 10/10! 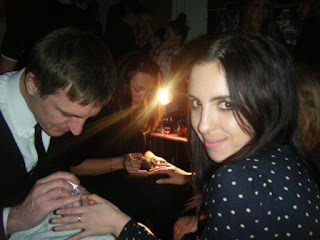 Andrea and I both enjoyed a lovely manicure. The manicurists did a sterling job in the cramped conditions of a packed-out Soho House. I opted for Taupe Couture, £4.19 from the new Nudes collection launching in March, a great match for Chanel's sell-out Particuliere. Andrea chose the rather more festive Express Finish in Red Comet.

Next, we spotted the Maybelline Pick'n'Mix. As excited as I was about the seemingly endless supply of Cola Bottles, I was even more thrilled to find dispensers filled with all manner of Maybelline goodies. I'm looking forward to rocking the Mono Eyeshadow in Couture Blue, Color Sensational Cream Gloss in Nude Pearl and Forever Strong PRO Polish in Orange Couture over the festive season.

It really was a fabulous evening and a reminder of the brand's cult, hip status. Stay tuned for reviews of the new products Best Tressers. Sx﻿
﻿